Procedural terrains can be stored much more efficiently. The shape of terrain is based on a mathematical formula and a set of numbers which define some of the characteristics of the terrain. When you save a project or clip with a procedural terrain those values take up very little space in a file. In contrast a heightfield will take up much, much more space. A procedural terrain covering a whole planet can take less than a kilobyte. Heightfields covering an entire planet, such as the Mars MOLA dataset, can run into the gigabytes and it's still only accurate to the resolution of the heightfields, which may not be enough.

It's possible to use procedural data to improve static data. A good example of this is adding extra detail to heightfields using fractals. TG does this by default in the Heightfield Shader node. The shader can add extra small scale fractal detail which helps to make up for the limited resolution of the underlying heightfield. Of course the extra detail is "fake" but in most cases this doesn't matter. Here's an example of a heightfield with and without added fractal detail: 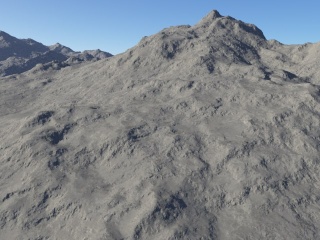 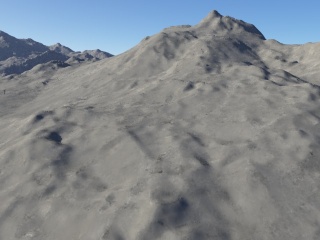