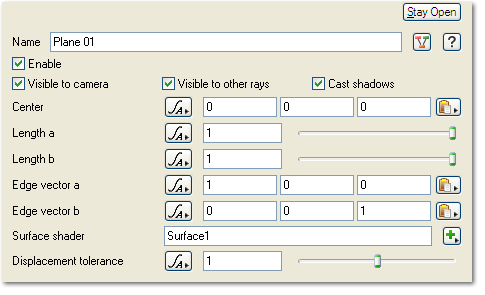 
The Plane object creates a flat plane. You can texture it just like any other object. By default the plane is rectangular but you can also shear it so it becomes a parallelogram.

The plane has quite a detailed preview. To help you size and orient the plane the A edge is drawn in orange and the B edge is drawn in magenta. The other two edges are drawn as dashed lines. The plane also has a full bounding box. If you can see the edges of the plane in the preview but not the plane itself then that means you are looking at the plane from "behind".

Left: Plane from "front". Right: Looking from "behind", plane isn't visible, though shadow still is.

The plane is not the easiest object to position. The orientation of the plane is controlled by setting the direction of two of its edges, using the Edge vector a and Edge vector b parameters. Essentially you set the way the plane faces by pointing those two edges in appropriate directions.

When a plane is created it's horizontal with edge A pointing along the X axis and edge B pointing along the Y axis. Lets say you want the plane to be vertical and facing down the negative X axis. Change the Edge vector b parameter to (0, 1, 0). This makes the B edge of the plane point straight upwards, which changes the orientation of plane as shown in the image below. 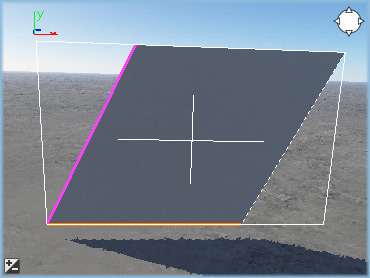