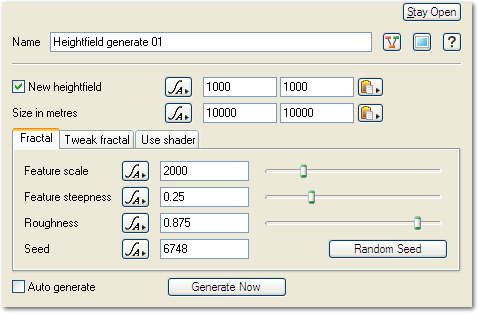 Node Description and Purpose:
The Heightfield Generate node can be used to generate unique heightfield terrain based on a simple but powerful set of criteria. You can generate new heightfields based on fractals built into the node or you can use other shaders to generate height information for the heightfield. Use this for creation of heightfield terrains, especially in cases where you wish to apply heightfield-specific operations such as Erosion. Heightfields are of finite resolution and cover a specific area, unlike procedural terrains which have theoretically infinite detail and can cover an entire planet. However in Terragen 2 heightfields may be optionally rendered with procedural displacement to enhance detail. This is enabled by default.