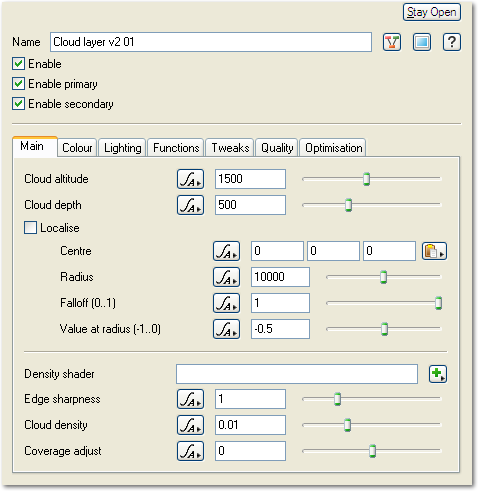 Node Description and Purpose:
The Cloud Layer node creates a planet-wide layer of clouds which may be either 2D with simulated 3D shading for faster rendering, or full volumetric 3D for maximum realism but with longer render times. Cloud layer placement is primarily defined by the height and altitude of the cloud layer. Many additional settings are provided to fine-tune the overall appearance of the cloud layer to simulate almost any real-world cloud type.

The easiest way to create new cloud layers is using the Add Cloud Layer button at the top of the Atmosphere project view. This allows you to choose from several cloud presets. Creating cloud layers automatically creates a density shader, which defines the overall shape or pattern of the clouds.

Multiple cloud layers can be used to create clouds at different altitudes, or of different types. There is no limit to the number of layers that can be added.

Localise falloff going from 0 to 1 <mediaplayer>file:Cloud_layer_localised_falloff.mp4</mediaplayer>

Cloud density going from 0 to 0.1 <mediaplayer>file:Cloud_layer_cloud_density.mp4</mediaplayer>

Coverage adjust going from -2 to 2 <mediaplayer>file:Cloud_layer_coverage_adjust.mp4</mediaplayer>