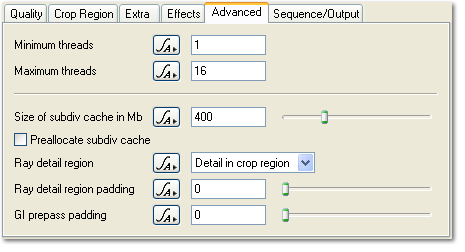 The render node gives you more control over this. You can use the Minimum threads and Maximum threads params to influence how many render threads TG2 creates. These params set the the upper and lower limits of the number of render threads created.

Let's say your computer has 4 cores and you only want it to use 3 cores for some reason. To do this you would set the Maximum threads param to 3. You could use the Minimum threads param to force TG2 to create more render threads than it normally would, although this not recommended.

Normally TG2 will use up the subdiv cache on an as-needed basis. The size param limits how can be used but it may not use that much. There may however be times when you want the subdiv cache to be created in it's entirety when render starts. You can use the Preallocate subdiv cache param for this. One situation where you might want to do this if you are having problems with running out of memory during rendering. By preallocating the subdiv cache you might help these sorts of errors become apparent sooner, which can save time in trying to figure out what is going wrong.

You may be tempted to set the subdiv cache to quite a large size. While increasing it a bit can be helpful in some scenes we don't recommend that you increase it a lot, particularly if you also check the preallocation option. When running in 32 bit mode TG2 may only have 2 to 4 GB of memory available. If you were to set the subdiv cache size to 1600 MB (1.6 GB) then that could mean only 400 MB of memory is left for other purposes. In this case you are likely to experience render errors or other problems. Even if you are using the 64 bit version setting the subdiv cache size too large can unnecessarily use up memory and may cause rendering to become slow or cause errors to occur.