Difference between revisions of "Planet" 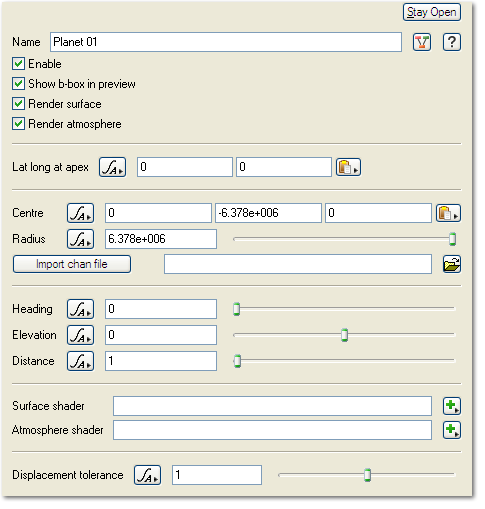 Node Description and Purpose:
The Planet object is the basis for most scenes in TG2. It is the terrain surface and the atmosphere is created around it.

TG2 can handle zooming into a planet from way out in "space" to very close to the planet surface. However if the scene you're creating is on a kind of local scale rather than planetary scale we recommend that you create the scene around the origin of the planet, which is effectively the North Pole. As you move a long way from the origin coordinates begin to lose accuracy and you might start to see things you're not expecting. In many cases this isn't a problem and creating the scene close to the origin works well.

It does however mean that even though TG2 can model whole planets if you want to model a real world location it isn't necessarily a good idea to put that location in the same location as it is in the real world. For example let's say you wanted to model an area in the South Island of New Zealand. If you used the real position on the planet, low down in the Southern Hemisphere, you would likely find problems with coordinate accuracy. It would be much better to reposition the location at the North Pole.

To help with this if you're using georeferenced data you can set the latitude and longitude of the planet origin. This effectively remaps that position to the planet origin where accuracy is better.

You can have multiple planets in a scene. For example to create a moon you can make a new Planet object and position and size it appropriately. Here are some sizes of planets etc. in our solar system: