Difference between revisions of "Notifier"

Node Description & Purpose:
The Notifier node is intended to be used for helping to debug function node networks. It allows you to see the values being output from nodes or to show a message when some user defined event happens.

You control when the node sends notifications with the Trigger input. The notification will be sent if the Trigger input is a value other than zero. There are many ways you could cause a notification could be triggered. For example, you could use a Conditional scalar to check if a value was greater than 1.0. Hook a constant scalar set to 1 up to the Conditional's If result input and then if the input value was greater than 0.5 one would be sent to Notifier node to trigger the message. Here's what that might look like in the node network: 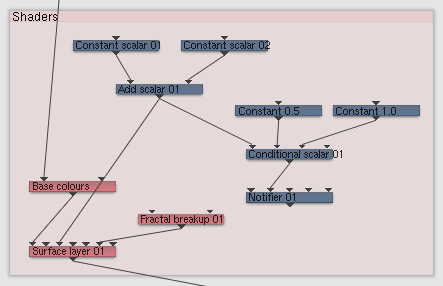 This is a bit of a contrived example, but it shows how you might set things up. In this case we adding together two Constant scalar nodes and using the result for the Luminosity value of Surface layer 01. The Add scalar node also has its output connection to the Conditional node. The Conditional node is using a constant 0.5 for its comparison value, and a constant 1.0 for its If result. Its Condition setting is set to Greater than. The output of the conditional is connected to the Trigger input of the Notifier. If the value of the Add scalar node is greater than 0.5 then 1.0 is sent to the Notifier, and because that's not equal to zero a notification will be sent.

The node can be set to notify only during full renders, or also for 3D preview rendering (henceforth just called preview rendering). When notifying you during preview renders you can expect there to potentially be a lot of notifications, perhaps too many to be manageable. 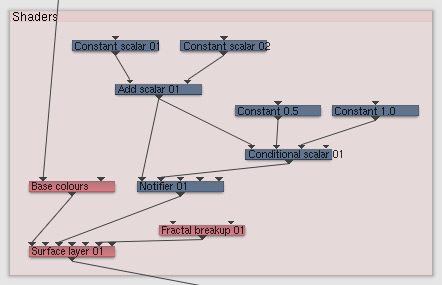 [Notifier connected into the main network]

The node always outputs the value that comes into the Input connection, whether it is a colour, scalar or vector. This effectively makes the node transparent to the network, so you can hook it in anywhere and it won't effect the network. In the screenshot above the Notifier node has no effect on the values flowing between the Add scalar 01 node and the Surface layer 01 node.

There are four different notification methods. You can use any combination of these you like. The simplest notification is just a beep. The three other methods display messages you enter in different places. You can have a message shown in the Errors and Warnings window, the console or written to a file that you specify. On Windows you will need to be using the command line version of the application to see console messages, they get displayed in the command line window. On OS X the messages are printed to the console log, which can be view using the Console application found in the Utilities folder in your Applications folder.

The node has three inputs for a colour, scalar or vector. You can display these values in the notification messages by using specially formatted message text. As a quick introduction let's say you have a node connected to the Scalar input. To show the Scalar value you could enter the following text in any of the message fields:

If the Scalar value was 10.5, this is the message the node would display:

Here is a list of the tokens supported by the node, with output examples:

Special tokens
$NAME Outputs the name of the Notifier node - Notifier 01
$NEWL Outputs a new line, or line break. Any further message text will appear on a new line.

Just a note on those last two tokens. The $NAME token can be very useful for distinguishing between multiple Notifier nodes. Use of the $NEWL token for warning messages isn't recommended, as the Errors and Warnings dialog only displays one line of text for each warning. Any text on a new line may not be visible.

Here's a complex example of using the tokens in message text:

This is what the displayed message text will look like with the following input values:

Here is the displayed message text:

You can see that the $NEWL token has broken the text into two lines.