From Terragen Documentation from Planetside Software
Revision as of 18:40, 11 November 2018 by BFlasher (talk | contribs) (Created page with "Terragen is based around the concept of “nodes”. These are the essential building blocks of a Terragen scene. Nodes are individual components with their own sets of specif...")
(diff) ← Older revision | Latest revision (diff) | Newer revision → (diff)
Jump to: navigation, search

Terragen is based around the concept of “nodes”. These are the essential building blocks of a Terragen scene. Nodes are individual components with their own sets of specific controls and output that, when connected together, form the scene. These nodes include functions for creating terrain, textures, objects, lighting, cameras, and renderers; virtually every element of a Terragen scene, in other words.

Most nodes are interconnected in a chain where information defining the scene flows from one node to the next through connection points on each node. Information flows in such a way that each node builds or operates on the input from the node above it. So a scene depends not just on the individual node settings, but on how the nodes are connected.

The nodes are represented in the Node Network. 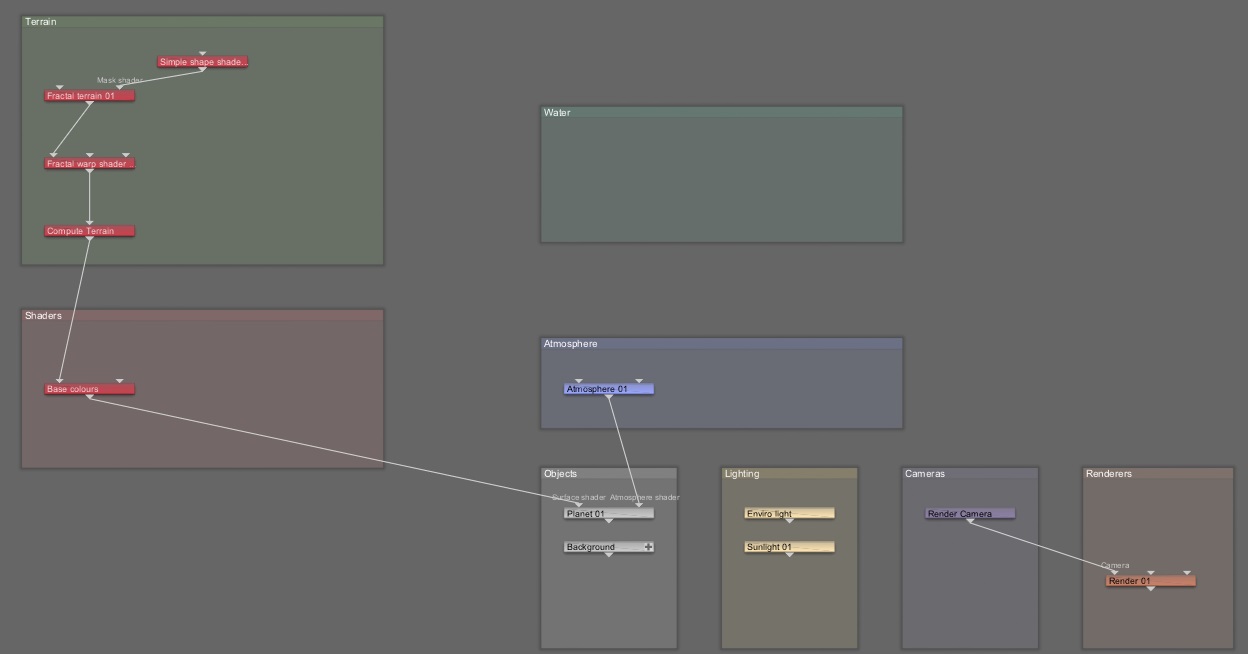 Nodes are organized into major areas such as terrain, shaders, atmosphere, etc. Note that not all nodes in the network are necessarily connected to each other. Global effects such as lighting, for example, are typically standalone. Other nodes such as cameras and renderers may connect only to each other, forming their own sub-networks in the larger node network.

The Node Network isn’t the only way to view the relationship between nodes. Nodes are also represented in the node list. 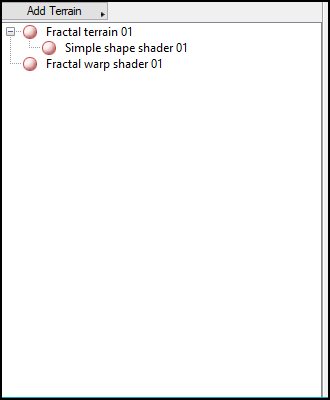 The Node List is a simpler, more focused view of the nodes in a scene. Rather than presenting the entire network, it shows the nodes that are relevant to the layout which you’re currently in. So if you’re in the Terrain layout, you’ll only see terrain-related nodes. These nodes are organized into hierarchical lists which can be expanded or collapsed.

You can add new nodes through the Add... button at the top of the Node List, or through certain functions in the node properties. When you add a node in either of these ways, it will automatically be connected to the appropriate connection point in the network. You can also add nodes directly via the Node Network, but you will need to manage the connections more manually in this case.

The Node Network and Node Lists display the same fundamental information, so changes in one affect the other. You can work primarily in one, or switch back and forth between the two. Most users will find the Node List easier to work with for common tasks, and use the Node Network in unusual situations where the node connections must be handled manually.