The Node List displays a structured lists of nodes in your scene. Only nodes which correspond to the focus of the current layout will be shown. For example, in the Terrain layout, the Node List displays nodes that control the shape of the terrain, while in the Atmosphere layout, the list will contain nodes that define the atmosphere and clouds. The only exception to this is the Node Network layout, which displays all nodes in the scene.

Nodes are displayed hierarchically, with sub-nodes, also known as “child nodes,” indented and connected to the main node, or “parent node,” by a dashed line. This structure mirrors the structure you'll see in the Node Network pane. Single-clicking any of the nodes in the list will bring up their settings in the Node Properties pane. The configuration of the Node List will vary depending on the layout you are in, but all of the lists include a button at the top to add additional nodes of appropriate type. 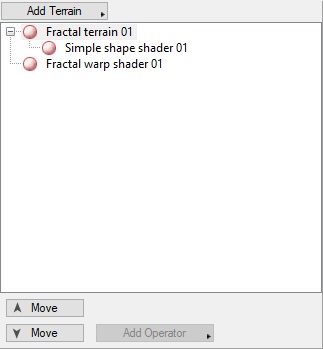 In the Terrain and Shaders layouts, the order of the nodes is also critical and can greatly affect the look of the final scene. Buttons are provided to change the position of shaders in the list. These are the Move buttons at the bottom of the list. The buttons have arrows pointing up and down to indicate the direction the currently selected node will be moved. Nodes at the top of the list will generally be “covered” or superseded by nodes further down. When dealing specifically with surface layers in the Shader layout, parents are also covered by their children, but the children are limited to the coverage or area of affect of their parents. The Node List in the Terrain layout also features a special button to add operators, which are nodes that manipulate heightfield data specifically.

Finally, the Node List in the Atmosphere layout has a unique button and information display which is only enabled when a generic Cloud layer is selected. The Pattern button accesses the input node of the Cloud layer's density shader, while the information display shows the altitude of the top and bottom of the currently selected cloud layer. 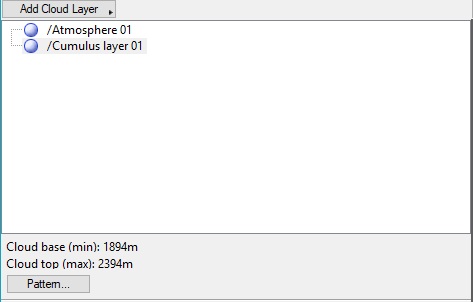