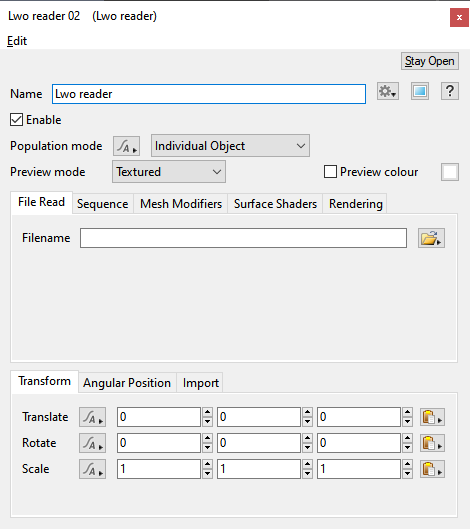 The LWO Reader node loads 3D geometry from LightWave in the LWO2 format introduced with Lighwave 6.0 (1999) and subsequently retired with Lightwave 2018. As of Lightwave 2020, 3D objects can still be exported in LWO2 format. However, Terragen does not import texture and uv information from the LWO2 format, therefore we recommend using the OBJ Reader to import non-Terragen formatted 3D objects. All versions of Lightwave can export 3D objects in OBJ format, which will preserve textures, vertex normals, and uv coordinates.

Read MDD (motion) file: Terragen can apply Motion Designer or “MDD” files created in third-party 3D software packages to an object within the project. The MDD file contains the position of every vertex in an object, for each frame of an animation. After an object is animated or otherwise deformed in the third-party 3D software, its vertex positions are “baked”, or saved in the MDD file format. This allows for complex animation to exist within a Terragen project, that otherwise could not.

Reverse Z (right handed): If the MDD file is facing in the wrong direction, you can reverse the Z axis in order to point it in the right direction.

Mesh displacer: The shader assigned to this parameter displaces the object’s vertices (mesh). For example, a power fractal shader can be used to displace the vertices of the 3D object or a population. The denser the object’s geometry, or more vertices it has, allows for more subtle deformations to be visible.

Recalculate Normals: This popup has provides four options because of the many different ways in which 3D software applications, exporters and modeling techniques are used to create geometry and MDD files. The MDD files and shaders assigned to the “Read MDD file” and “Mesh displacer” parameters change the base 3D object’s normals, requiring them to be recomputed in order to render correctly. The “Recalculate Normals” parameter instructs Terragen how to recompute the normals.

No: The normals are unchanged and left as they were in the original Wavefront OBJ, Lightwave LWO, or Terragen TGO formatted object. 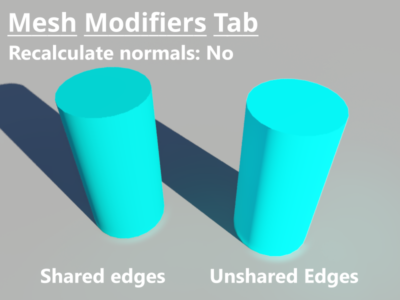 Conservative Update: Only the existing normals are updated. In other words, it relies on the normals to have been mapped to faces in a meaningful way in the original object. Each recalculated normal is the average of the normals of the faces that use the normal. 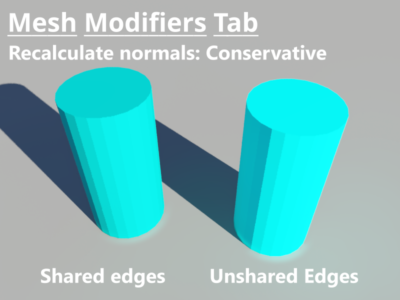 Smooth + preserve creases: Similar to "Conservative update" except that it preprocesses the model to merge any duplicate normals. After doing this it recalculates each normal using the average of the normals of the faces that use the normal. 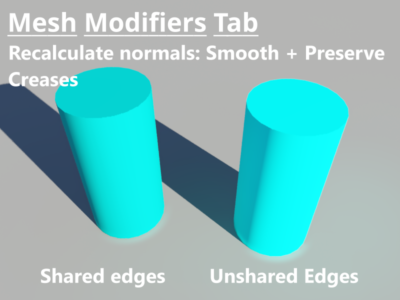 Smooth everything: All the prior normals are cleared. A new normal is created for every vertex. Each normal is the average of the normals of the faces that use the vertex, therefore it creates a smooth appearance across faces that share vertices with other faces. 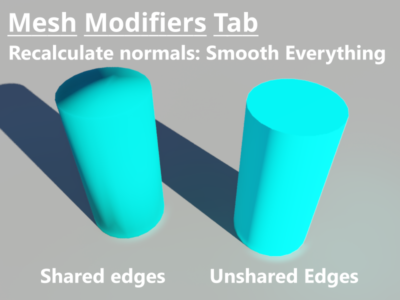 Description: This tab lets you assign a surface shader to texture the LWO object. Terragen does not import texture and uv information for Lightwave LWO2 formatted objects, and the untextured object will appear black until a shader is assigned in the Surface shader param, at which time Terragen will create the internal node network for the LWO object. 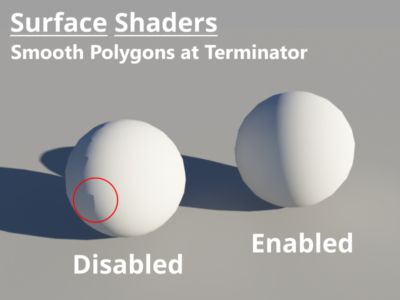 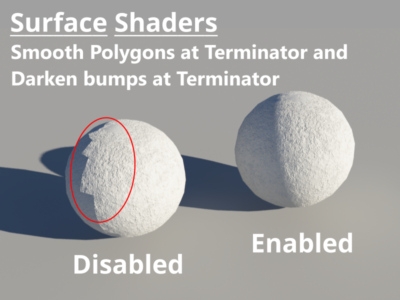 Description: This tab has settings which use angles and distance to set the position of the rock relative to the scene origin. These settings are an alternative to using the Translate setting in the Transform tab. The diagram below shows how all the parameters relate to each other and the origin.

Description: These parameters apply to .chan/.mov and FBX import.