Heightfield Merge allows you to merge two heightfields together based on simple settings that control the amount of heightfield mixing and the type of mixing method used.

These images were used as heightfields in the examples below. 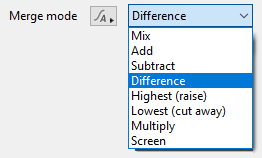