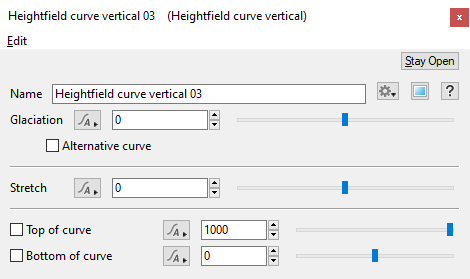 This node provides two types of curves, “Glaciation” and “Stretch”, in which to modify the terrain. You can think of the curves as extending vertically from the lowest point in the terrain to the highest point. The “Top of curve” and “Bottom of curve” settings allow you to set an altitude at which the curves start and stop, effectively overriding the lowest and highest points of the terrain.

Glaciation is the erosion of the terrain by ice glaciers and the debris contained within them over a period of time. The two curve shapes, “Glaciation” and “Alternate curve” allow you to flatten out low altitudes while higher altitudes remain less affected.


A single object or device in the node network which generates or modifies data and may accept input data or create output data or both, depending on its function. Nodes usually have their own settings which control the data they create or how they modify data passing through them. Nodes are connected together in a network to perform work in a network-based user interface. In Terragen 2 nodes are connected together to describe a scene.