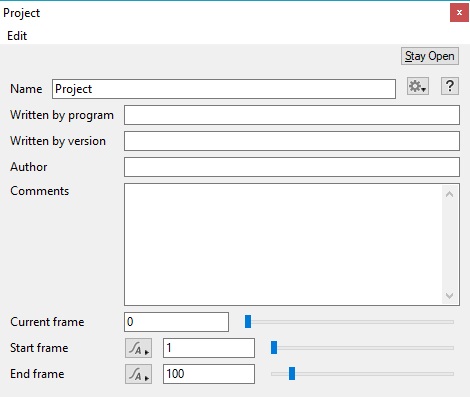 To the right of the 'Project Settings' button is a display of the current frame number, defaulting to 1. You can manually type values here to skip to a specific frame, use the frame controls to the right, or even drag on the timeline to change frame numbers. The frame number display will change as the current frame is adjusted. Next to the 'Frame number display', are controls for moving through the animation timeline. The icons here may be familiar if you are accustomed to video editing, and they are also similar to that used in many other applications. The buttons featuring double arrows with lines skip to the beginning and end of the timeline, respectively. The single arrow with a line moves a single frame backward or forward in the timeline. Arrows facing backward move backward in the timeline, and forward facing arrows move forward. Once you change the current frame number, the '3D Preview' will update to reflect the settings of the curent frame. In the default scene no animation is defined so no changes will be visible. In the middle is a single right-facing arrow, the 'Play button', which will automatically move through the entire timeline in realtime. This will display any existing animation in the '3D Preview', though it will be rendered with limited detail based on the rendered detail already present in the preview when you press the 'Play button'. The 'Timeline' comes next, a long slider that can be dragged to “scrub” through the animation and move quickly to a general part of an animation. Click and drag the position indicator on the slider to move the current frame, or click directly on the slider to jump 10 frames at a time, either forward or back, depending on whether your cursor is to the right or left of the slider bar, respectively. Finally, on the far-right, is the 'Errors and warnings display'. The red circle signifies errors, with the number next to it showing how many have occurred since the start of the current program session. The yellow triangle and exclamation point next to it signifies warnings, again with a counter. An “error” is a serious problem, which may be something like a missing file or a critical render problem. A “warning” is less serious and therefore less likely to have a significant impact on the scene. Clicking the “Errors and warnings display' will bring up the 'Errors and warnings window' which will give you more detailed descriptions of any errors and warnings that have occurred so far.